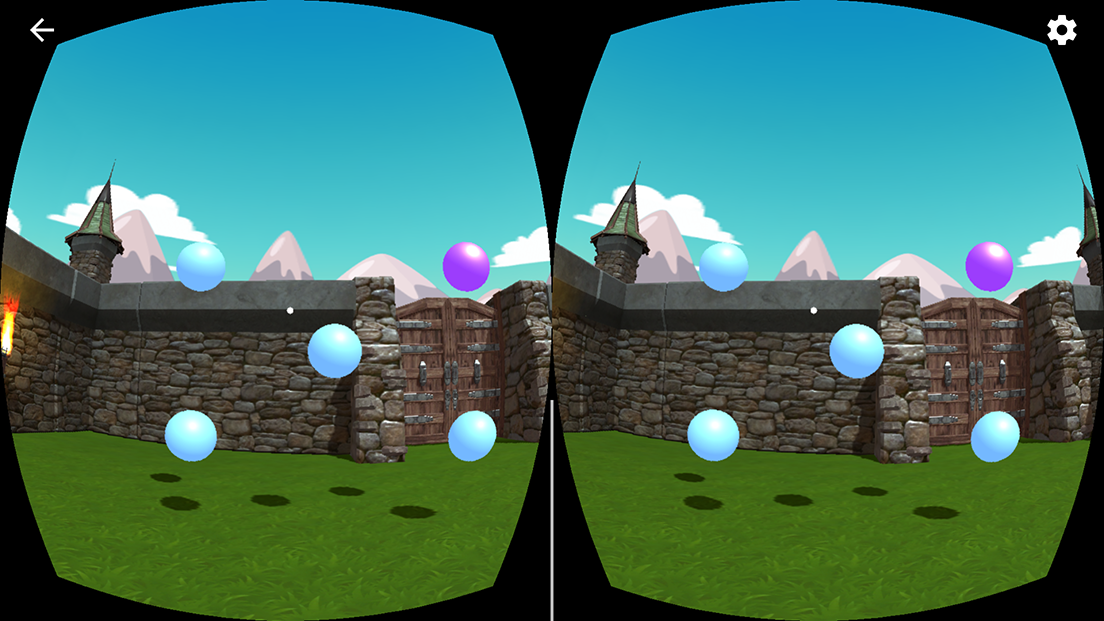 As part of my VR developer nanodegree, the first project of the second term involved creating a puzzler game. The difference between this project and the ones in the first term is that the focus was supposed to be on the process of the design, not just the final build of the application itself. For me, this was much easier said, than done.

The idea for Crazy Castle was to create a puzzle game my daughter would enjoy. At eight, she’s already pretty proficient at gaming, but always wants to check out whatever I’m working on (using her own cardboard). Because of this, I wanted to stay away from a dark, dungeon theme as the course showed and instead make it bright and open with a variety of puzzles to keep her entertained.

The first step of the project was to define what it was going to be and who it was for. Since this is a course, the what was already somewhat defined. It was defining the who and how I could change it to fit that audience that needed to happen.

Statement of Purpose (the what):

Crazy Castle is a mobile VR puzzle game which challenges gamers through a series of different puzzles, allowing them to move through the castle to win by reaching the top.

“Can we play another game with the headset?”

Beth is a grade school student that has always loved playing games. She likes to play  mobile and console games with her dad and thinks the VR ones are cool. She’s very independent and likes to explore her environment in a game, quickly trying to figure out the mechanic to rapidly progress. She’s also a competitive collector, in real life and the game world. She always wants to have the most coins or items in any level!

Beth is still new to VR and needs help getting started, but once the game is running, wants to figure it out herself. She is a quick learner.

Once I’d decided what I was after and who it was for, I rough sketched a couple different concepts. One, was progressing upwards through a tower as originally intended. The next two focused on progressing laterally, one outside in a forrest scene and once in a castle. I changed the movement direction in case moving upwards proved to be a trouble point or too jarring. After looking at different movement types, I opted for the third sketch.

With some of my thoughts documented, I put together an initial demo and asked my daughter and wife some questions to get their take on the feel and where I thought the design would go. One, had no experience with VR and the other, was the inspiration for my persona. While similar in feedback, I felt my daughter was a bit more forgiving in some of the visual discrepancies between the asset sets I used.

Question: What do you think of the overall mood? How does it feel?

Subject 1: Happy. Sunny and bright. Open feeling. I like the mountains and the torches look real.

Subject 2: Very bright. Seems weird to have torches with it so bright out. Mountains are more cartoony than the castle. It’s a mismatch.

Action: I tried to remove the mountains, but it made the scene feel empty, so I put them back in at the last moment. The torches, although only orange was shown during testing, were different colors as the user progressed through rooms. Once that feature was removed, the torches just stayed orange…but more on that in a bit.

Question: How does the size of the scene feel? Are you taller or shorter than normal? Do the walls and doors feel like they’re the right size?

Subject 1: Feels just about right. Maybe a little taller than real life. Walls and things are the right size.

Subject 2: Height is about right. Overall space size is okay.

Question: What about the interaction? Can you easily click on the orbs?

Feedback: Both agreed that the orbs were a good size and could be clicked on, but should be closer to the player.

Action taken: Moved the player waypoint closer to the orbs.

Question: Is this a game you would download and play?

Subject 2: Maybe…I’m not sure yet.

Question: What would you change or like to see more of in the game?

Subject 1: More rooms to walk through with a bedroom for the queen and king to sleep in.

Subject 2: Try to match the mountains and castle better. Maybe just take the mountains. Slow the clouds down.

Action taken: Well, I didn’t really meet either requests. I did slow the clouds down, but still have no idea where I’d put a master suite for the king and queen!

Overall, I appreciated the feedback, but found I leaned more toward making changes that would benefit my daughter’s play of the build. She was, after all, the target audience.

I later tested my initial UI sizing with my test subjects and both agreed that the size was fine, text was clear (although I’m pretty sure both skimmed right over it) and the button was easy to interact with. I then sketched what the panel might look like if I didn’t use a basic square. I immediately found an image that was almost an exact match to my drawing, but found when text was placed over it, it didn’t look at all natural or follow the curve of the parchment. I kept the same idea, but instead used a flat scroll to achieve a similar effect.

Breakdown of (or in) the final build

Armed with an idea, some sketches, some feedback and I start, I set forth to make my creation. I quickly implemented most of the game logic, but before finalizing and testing it, moved onto making the additional rooms. That’s when things started to get rocky. Laying out the assets was quick, but the game logic provided was designed for a single-room design. I tried to replicate, reuse and re-tool the script but continually encountered errors along the way. It was at this point where I became obsessed, ignoring updates and additions I could make to the design and focusing instead on a mechanic I was making very little headway on. With time running out, I finally admitted defeat, focusing on making sure I could complete a working build.

After regaining focus, I was able to get the final build finished and on my phone. While fun to document and build, I still feel like I missed the mark for what I was after. I spent far longer trying to solve problems than I’d have liked, which did cause some rushing toward the end.  If I could go back, I’d have completed a 1-level build to my liking prior to trying to add onto it.

I’d still say it was a success though. My target audience would play the game for hours, if I’d let her, even though there is only one puzzle over and over. Hopefully, I can add more puzzles and vary the difficulty in a future build.

As time permits, I want to revisit the project and work on enhancing it. This includes:

Aside from a lot of Googling for answers to problems, here are links to the assets used to create the game: